What exactly is the difference between simple living and minimalism? If you’re new to either or both of these terms it can seem as though they are both referring to the same thing.

At its most basic, minimalism is something that is almost completely (but not quite) encompassed by simple living. Let’s have a look at a simple Venn diagram I’ve drawn for you:

Simple living can apply to a lot of different areas of our lives, but the essential idea behind it is that it makes things less complicated, less consumer-driven and less frantic. People interested in simple living might be keen to grow their own food, reduce waste, spend more time outdoors and away from technology, practice meditation and mindfulness, and generally refuse to be part of the so-called rat race of modern life.

Minimalism on the other hand is specifically about owning less. The motivation behind minimalism often comes from a desire to live a more simple life. In fact, many people develop an enthusiasm for simple living after discovering minimalism.

When is minimalism not simple living?

Minimalism is also a term used to describe various arts, and can apply to music, writing, and architecture among other things. This type of minimalism isn’t part of simple living, and there isn’t necessarily any overlap. You might love minimalist architecture, but still hoard roomfuls of stuff.

There is also a style of minimalism that is quite contrary to simple living and it involves the assumption that you can just re-buy what you need. There is a post by the Minimalists that states (and I am not keen on these kind of blanket rules that you often see in the decluttering space), if you can replace it for less than $20 within a 20 mile radius, you don’t need to keep it just-in-case.

They do say that they have only had to replace things on five occasions. But this is possibly because their judgement on what they need is finely honed. If you are new to minimalism and give/throw everything away that fits into this category, but then find you need a lot more of it back that you thought you would, you are not living a simple life. You are not consuming with a conscience and you are not helping the global problem of over-consumption. Instead you are unwittingly supporting a throwaway society which is to the detriment of planetary stability and health.

So minimalism isn’t always aligned with living a simpler life.

Is simple living ever NOT minimalism?

Now this is an interesting question. Simple living might lead you down a path of sustainability and even zero waste. This may conflict with minimalism if you are consciously saving things for re-use and recycling without knowing exactly how you will use them in the future. In fact, it is possible to live what would be regarded a very simple life, with an enormous amount of stuff.

I think that generally though, in first world countries, part of simple living is owning less. Whether that’s as extreme as no fixed home, or the choice to live without a car, or consciously owning less clothing, books and DVDs, simple living tends to be minimalistic in its definition.

Which one are you?

If your absolute priority is owning less, then minimalism is most certainly your thing. Whether you live a simple life or not depends on what you do with what you have left. If you only own a laptop and a phone, but you spend all your time gaming and in online chatrooms, then you’re probably not living what would be classified as a simple life.

Likewise if you make all your own food and spend most of your time outdoors and loving being in the present, but you live in a five bedroom mansion piled high with three generations of belongings, you’re not really a minimalist.

These are extremes. In reality, most of us are a mix of both. The driving factor that brings many people to minimalism is the desire to outwit the chaotic, overwhelming, demanding busy-ness of modern life. People get fed up with too much stuff, too many todos, too much debt, too many commitments and a cluttered house that seems to suck the life out of them rather than allow them to rest and recuperate. Owning less means less hobbies, and less distractions. This (simple) fact leads minimalists nicely into simple living.

My priority was always simple living

I knew for a long time that I wanted a simpler life. Before I’d even heard the term ‘simple living’, I knew that I hated the stress, the overwhelm and the endless duty to look after, and attempt to organise, everything I owned. My path started out with the discovery of minimalism.

I thought that if I got rid of almost everything life would be better. What I didn’t realise was that just getting rid of everything wouldn’t change who I was and the kind of life I lived. But it cleared enough space – physically and mentally – for me to adjust and move in the right direction. Minimalism was my original goal, but it became my journey, and slowly that has morphed into a desire to live a simple, content, meaningful and BIG life. I don’t want to sit back and do nothing, I want to do more. Just with less stuff.

A word about labels

I’ve written this without going into deep detail. There are subtle nuances to both simple living and minimalism that flout the ‘rules’.

It is important to understand that these are convenient labels, and that labels can be helpful, but they aren’t always a good thing.

What matters is that you’re moving in the direction that you want to move in. You need to feel content, and happy with the choices that you make about how you live your life and how much stuff you purchase and consume.

More than ever now there is media focus on reducing plastic, reducing consumption, re-using and recycling. I love this – I think it’s an important part of the responsibility we have to our only home (i.e. our planet), that many of us have ignored for too long.

This isn’t a practice life, it’s the real thing, so whatever we call ourselves, we need to get out there and live it in a way that makes us happy. We can be role models for the next generation, and living a life in tune with what you believe can only make you feel good about the legacy you leave behind.

Declutter for good with the Simple Days decluttering course: Declutter - For Good

5 thoughts on “The Difference Between Simple Living And Minimalism”

Declutter for good with the Simple Days decluttering course: Declutter - For Good 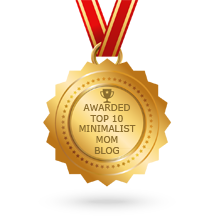